Tamaya residents who are sports fans will have a “field” day once they settle in their new custom Florida home. Not only do they enjoy tremendous activities in their 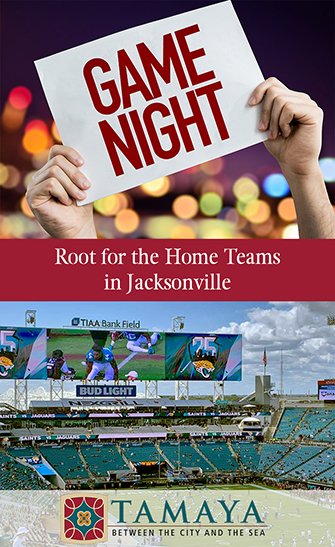 own master-planned community thanks to its amenities, but the Jacksonville area also offers a surfeit of great sports teams.

Tamaya, whose tagline is “between the city and sea,” is tucked on Jacksonville’s southeast side. It’s only six miles from Atlantic Ocean beaches to the east, and the Interstate 295 beltway is only a few miles to the west. That makes it easy to get anywhere in “JAX!”

The better to be sporty in your new hometown!

Here’s our guide to cheering for Jacksonville’s home teams.

THE PLAYERS Championship at TPC Sawgrass

Located in Ponte Vedra, Florida, only 13 miles southeast of Tamaya, TPC Sawgrass is the home golf course of THE PLAYERS Championship, one of the PGA Tour’s top annual tournaments. It also forms a gorgeous background for PGA Tour headquarters.

If you’re a golfer or simply enjoy watching the pros play, a visit to TPC Sawgrass is a must. Watch a round of THE PLAYERS or book your own round.

The Jaguars play at TIAA Bank Field in downtown Jacksonville and have been a Jacksonville sports fixture here since the franchise’s debut in 1995.

One of college football’s biggest annual rivalries — the University of Florida versus the University of Georgia — has been played at a “neutral site” in Jacksonville since 1933 (except during TIAA Bank Field renovations in 1994 and 1995). Known as the “World’s Largest Cocktail Party,” it’s one of the city’s major sports events each November.

The Jacksonville Armada Football Cub began play here in 2015 and has built an avid fan base. Head for the pitch to cheer the U-23 squad in the National Premier Soccer League, and the Armada’s top team in upper professional leagues. As of this writing, Armada officials are seeking land and city approval to build a soccer stadium downtown.

Tamaya residents can feel the chill when they support the Icemen, who compete in the East Coast Hockey League and have made Jacksonville their hometown since 2017. The Icemen, a minor-league affiliate of the NHL’s Winnipeg Jets, play at the Vystar Veterans Memorial Coliseum in downtown Jacksonville.

Is this a great nickname or what? The Jumbo Shrimp are the Miami Marlins’ Class AA affiliate and play at cozy Bragan Field at the Baseball Grounds of Jacksonville, downtown. Minor-league baseball has a rich history in Jacksonville, so come on out to the old, ball game.

Ready for your Tamaya lifestyle? Talk to ICI Homes here.