You really have to visit Tamaya to appreciate what you’ll find.

Our website and that of our builder, ICI Homes, furnishes plenty of great photos, video and reading material. And you’ll probably think you’ll know what to expect when you arrive at our sales 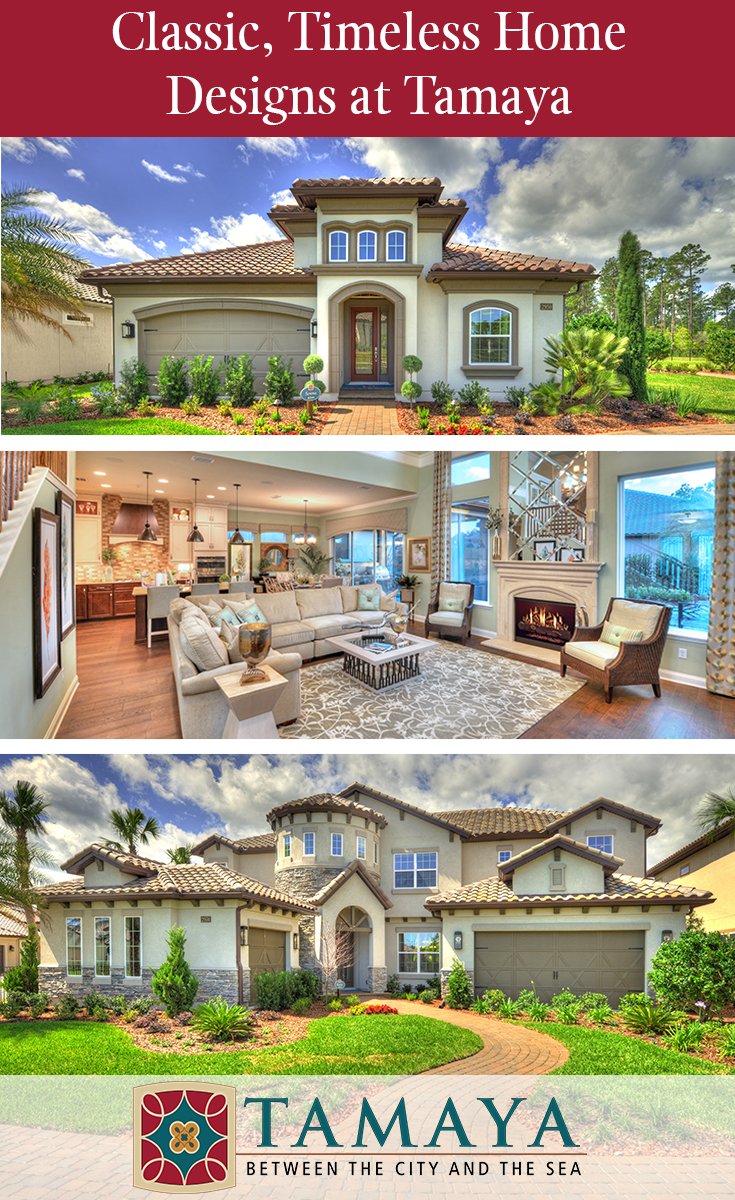 center and model home park. But you still might be shocked.

The beauty of Tamaya is that its design was deliberate. Its homes are all Mediterranean, Spanish and Tuscan in inspiration, and those classic elements of stucco, clay-tile roofs and cast-iron decorative flourishes — among many others — are all you’ll see.

And perfectly at home in Florida’s subtropical climate.

Perhaps the most amazing thing? No two homes are alike thanks to ICI Homes’ emphasis on customization. New-home buyers can get the changes that they want, usually at no or low cost, and the consistent exterior materials ensure that everyone’s home complements their neighbors’.

We think those are great ideas (of course we do, they’re ours!).

Seriously, if you’re in the market for a new custom Florida home in metro Jacksonville, come see Tamaya’s classic, timeless home designs. We’ll give you more reasons why you should.

It’s ‘Between the City and the Sea’

This is important if you’re seeking a new custom home in the Jacksonville area. The city and its surrounding towns and communities are growing fast — “JAX” was ranked as the No. 2 city in the U.S. where people want to move, per Forbes in 2016 — and thriving industries, healthcare and quality of life are only a few reasons for the city’s popularity among Florida home buyers.

Tamaya’s location at the intersections of Beach Boulevard and Kernan Boulevard, takes advantage of all that. It’s on the eastern side of Jacksonville, and its tagline is “Between the City and the Sea.” Beautiful Atlantic Ocean beaches are six miles east of Tamaya. “JAX’s” Interstate 295 beltway, which takes you anywhere in the metro area, is only six miles east.

More Mediterranean isn’t too much

That’s why we want you to visit Tamaya.

Because ICI Homes encourages customization, you’ll see different variations of the many floorplans offered here. Lots range from 50 feet to 85 feet, and we dare you to drive completed neighborhood streets and find the exact plan and exterior, over and over.

What you will find is numerous variations of white, vanilla, cocoa, gray and slate exterior stucco. Different colors of ceiling tiles. Front doors ranging from deep, burnished red, to lacquered oak, to the occasional, cheerful turquoise or gold.

You’ll also find columns, arched windows and doorways, and tiny courtyards. The effect is calming and soothing. Like everything belongs.

This even extends to Tamaya’s centerpiece, the 10,000-square-foot Residents Club, which sports similar colonnades, embellishments and colorations.

Even the landscaping is timeless

Many of the same plants, trees and flowers you’d see in Mediterranean countries such as Italy, Spain, Greece and southern France, naturally thrive in northeast Florida. You might even think of them of as “Florida” plants rather than Mediterranean.

Ready to check out Tamaya? Talk to ICI Homes here.