The recent evening presented a few dozen guest with an early peek at a brand-new, 2,400-unit housing development planned for the prime location, planted right between downtown Jacksonville and the beaches.

It’s the newest development by residential builder ICI Homes. Currently, the company has nine such communities in its northeast corridor. After a few long years of economic downturn, it is sign that things are finally looking up, said ICI Homes President Don Wilford.

“We’ve gone through the most devastating time ever,” he said. “We were down for five or six years. We noticed about 18 months ago a strong resurgence of our business.”

And it’s not just one company seeing a boost in the construction business.

Over the last few years, the construction in both commercial and residential development has been making a steady rebound in the area, according to Dan Blanchard, president of the Northeast Florida Builder’s Association.

The builders association reports that the number of building permits issued in that area has made a slow but steady climb from a low of just over 3,000 in 2011 to nearly double that in 2013. That includes in areas of Duval County’s previously hard-hit Northside.

He projects the number of building permits will reach 8,000 by the end of this year.

“Clearly there’s been a pent up demand over the years and we’ve got an economy that’s improving and there’s a lot of people who are looking to buy a new home,” he said.

When it comes to employment, Don Wilford, with ICI Homes, points out that the growth in both commercial and residential building brings a bump in well-paying jobs to the area. 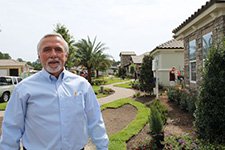 “People don’t realize that construction runs our nation and when we’re not building houses, they’re not making appliances or toilets and it’s just huge,” he said. “You figure a $300,000 house has an impact where we’re probably paying wages of $75,000 on that house.”

The pace of the increase is slower this time around compared to before the 2008 economic crash. It is still a far cry from its 2005 high of nearly 18,000 permits a year, but Dan Blanchard with the Northeast Florida Builder’s Association said this time around the increase appears more sustainable.

“When you grow too fast, the market can’t keep up with you and even the growth that we’re having now is challenging for some of the contractors and suppliers to meet the needs of the market,” he said. “But we’re getting there and it’s in a way that will work in the market.”